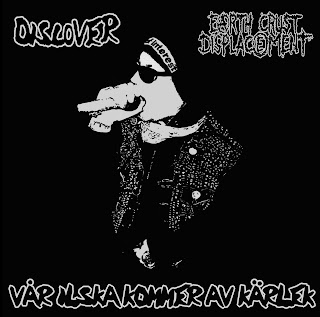 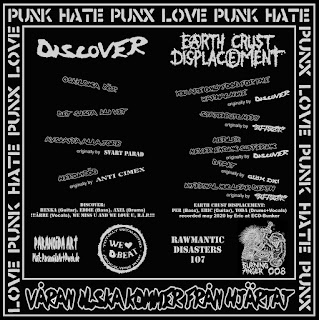 Discover/Earth Crust Displacement "split" "7 (RAW 107)
Super brutal D-Beat Raw Punk Split from Sweden/Germany in memory of Arre, vocalist of Discover, Giftgasattack, Glöm Da and other bands who sadly passed away way too early, we miss you mate, DIS IS FOR YOU!!! On this special release we have the final unreleased recordings by Swedens Discover, we allways have been DIE HARD FANS from day one. They released a demotape which later became a 12inch on Rawmantic Disasters, another CD, a split 7inch with Anger Burning and a superloud full 7inch also on Rawmantic Disasters. On tis split there are two unreleased songs and two covers of Svart Framtid and Anti Cimex, delivered the way we love it to death, 666% Raw Punk Noize Inferno.
On the other side there is Berlin's Earth Crust Displacement. Dis time feat. Per of Giftgasattack/Warvictims/Absurd SS on Bass. The band salutes Arre with covering his bands in their own unique noizy raw punk style. Cover art by Anja, ex-singer of Earth Crust Displacement. 200 copies regular black vinyl, 100 copies limited white vinyl and 30 copies testpress edition with alternative artwork.
Discover side
ECD bandcamp
Posted by Rawmantic Disasters Records at 02:51

This blogg is under construction